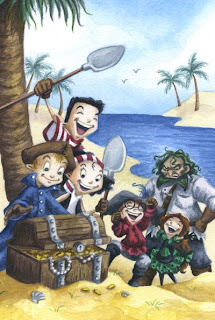 Pirate School Book 5: Treasure Trouble has been released and is now available in stores or online at Amazon.com!

This was such a great book to work on, mostly because by this point in the series, the characters' personalities had become well developed. This allowed me to take artistic liberties with the illustrations. It was fun to think about the characters in each scene, and imagine little details or expressions that may not have been described in the text, but were part of that character. For me, creating the illustrations was like hiding little inside jokes for the author, the art director, and readers who have followed the series. 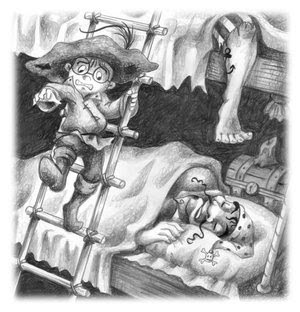 My favorite drawing from the book is Gary sneaking into the pirates' bunks. For some reason, I just love imagining what pirate pajamas might look like. I especially like the skull & crossbones hanging off of one of the sleeping pirate's polka-dotted night cap!

I hope you enjoy the latest Pirate School adventure with Pete, Inna, Gary, Vicky and Aaron! Yo, ho, ho!
Posted by Jennifer Zivoin at 8:27 AM